Kayak fishing can be a blast!

That is if you're not having to juggle your rods while you're paddling!

Having your kayak loaded with rod holders, not only allows you to take more poles out on the water with you, but it allows you to catch more fish! Since you'll have an extra pair of hands on the kayak!

*Keep reading for full reviews below

How Do You Use Rod Holders?

Regardless of the style, of fishing or rod, to use a rod holder just slide the rod handle into the holder.

Each method requires a different rod, and each rod is built differently. As a result, not all kayak rod holders will work as well with all rods. It's preferred that the rod holder you choose to be able to support a wide variety of poles.

Rod holders can free up your hands so you can cast some swim baits trying to land a bass, while you have another pole the holder with some stink bait sitting at the bottom of the river.

What Are the Preferable Characteristics of Rod Holders?

To maximize a kayak rod holder's utility, there are several characteristics the rod holder should have. It should have the ability to rotate horizontally. The user should also be able to vary the vertical angle at which the rod is held. Again, not all types of fishing have the same positioning requirements for rod holders. You will see that the flush mounted rod holder misses out on many of the characteristics we will be discussing.

Again, good for one fisherman is not necessarily good for the next.

What are the Types of Rod Holders?

In general, within the kayaking community, there are two types of rod holder. The flush mounted rod holder, as the name implies, mounts flush with the surface of the kayak. It's advantages and disadvantages will be discussed later in this article.

The second type of rod holder is deck mounted. There is, as a subcategory, also the side mounted bracket.

Where Should You Mount a Kayak Rod Holder?

The flush mounted rod holder installs with four fastening points. However, the rod' reel will be closer to the deck.

The primary advantage of a deck mounted rod holder is the ease of installation. Drill four holes for either a square or rectangular bracket plate, screw the plate in, and you are good to go. A disadvantage is the deck mounted plate base can be in the way when transporting the kayak.

The Side of the Boat

What type of Installation is Best?

Well, that depends on your kayak. Flush mounting has the advantage of having a clean surface when transporting the kayak. There is nothing sticking up or in danger of being broken. One of the primary disadvantages is the fact that it cannot necessarily accommodate the various configuration of rods. A casting rod, with the reel on top, might work, whereas a trolling rod, with the reel on the bottom may not.

With deck mounting, the bracket that secures the rod holder sticks up. And depending on where it is installed, it virtually begs to be broken while transporting the kayak.

Additionally, with a flush mounted holder, you don't have the option of changing the direction of the holder. It is as it was installed.

How Do You Install a Rod Holder?

One of the important considerations in selecting a rod holder is installation needs. Typically, the installation is relatively simple. If you can avoid putting a hole in your finger with an electric drill, you can probably install most, if not all of the flush mounted rod holders. The method for installing a deck-mounted bracket is very similar requiring a similar set of tools.

As with the flush mounted rod holder, the installation of the bracket is relatively simple. 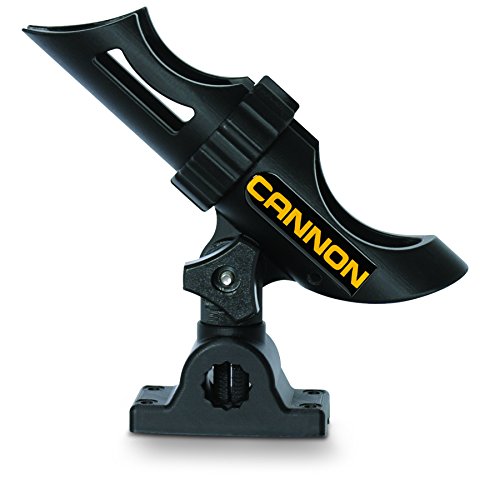 The Cannon Downrigger can be used while fishing using spinning reels as well they can handle casting rods. This rod holder accommodates to various lengths of rod butts, making it useful for trolling as well. And unlike some kayak rod holders, the mount (a deck mount) comes with the product.

The Downrigger Rod Holder is a sturdy, reliable and heavy-duty piece of equipment. This rod holder is best suited for large rods. Overall, the quality of this rod holder makes it a steal. Plus, the 360-degree horizontal turn and 90-degree tilt requirements for any good rod holder. 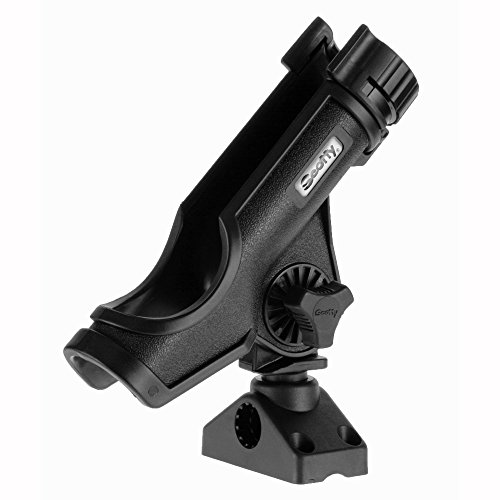 The Scotty Power Lock Rod Holder can only be described as a sturdy, reliable and high-quality product that is an extremely recommended purchase to all recreational fisherman. The holder is easy to reposition, as well as the bracket is innovatively designed to keep the rod holder (and your rod) from popping out unexpectedly or moving around a lot.

The settings for the angle of the rod are solid and will not inadvertently slip or move while in use. The Scotty Power Lock will hold just about any reel. They are durable and easy to install. Overall, it is a good buy for the price and a good piece of equipment for the kayak. Vince Rinando says Scotty is his favorite. 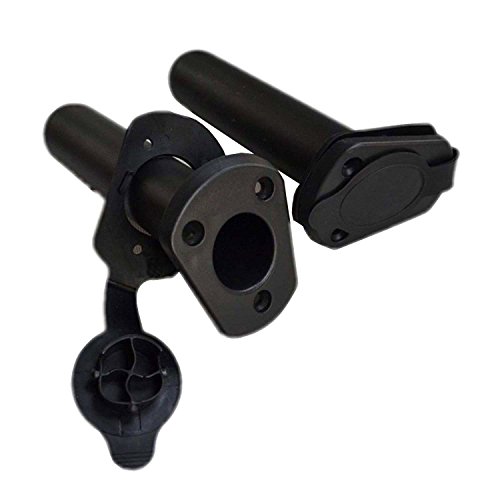 You’ll want to use your own mounting hardware with this holder as the screws that come with it are short and don’t give you the confidence that it will remain movement-free for very long, especially if you plan to go on a moving boat during your fishing trip.

The approximate length of the rod holder is 19 cm while the diameter is about 45mm inside the tube.

Want up to date kayak tips, tricks and reviews?

The Best Fishing Kayak for the Money: For That Big Catch Every Time

The Best Kayak Fish Finder: Showing you the way to the Fish!

The Best Dry Bag for Kayaking to Protect Your Gear

The Best Kayak Cooler: Because Having a Cold Drink is Never Bad Thing

The Best Fishing Kayak for the Money: For That Big Catch Every Time

River Rat Guide
0
Earnings Disclaimer: When you buy certain products from some of the sites which we link to, River Rat Guide receives a commission.