Whether fly fishing for trout or angling in salt water, finding the best fluorocarbon leader is the secret to convincing line-wary fish to bite.

Not only are fluorocarbon leaders stronger than mono and microfilament ones, but they are also nearly invisible underwater. Strength plus stealth can equal more fish in the net.

What Is a Leader and Why Do I Need One?

A leader is a length of line attached to your main fishing line. Distinct types of leaders are helpful for different situations, settings, and fish. A leader is knotted to your line and is where your bait or lure is tied. Length is dependent on your personal preference, as well as the properties of the leader material.

Other leaders include a variety of wires, such as titanium or stainless steel. All types of leaders have positive and negative attributes, but fluorocarbon is suitable for a range of applications. Fish can spot lines from a distance, and some materials look like a flashing danger sign.

A leader serves as a shock absorber when casting, and is a functional component of a flexible line. It can prevent hardier fish from gnawing off your line and protects against sawed off edges from rough terrain or particularly edgy fish.

Therefore, you might consider using a leader depending on what type of fish you’re after, and how challenging their local environment is.

Why Should I Use Fluorocarbon Leaders?

Fluorocarbon leaders possess strength, durability, and UV resistance based on their chemical makeup. The fluorocarbon family of compounds serves in a variety of commercial applications.

Products that incorporate fluorocarbon polymers include nonstick plastic in Teflon, protective coatings in other forms of plastics, and elastic fluorocarbons used for seals and gaskets in high-tech industries.

Thanks to science, we can assume the chemical components of the material will serve us well when applied to the ends of our poles. Its hardiness and resistance to rough surfaces answer the call for situations that require tougher lines.

These can include settings under heavy cover, like when fishing for bass. There is less chance of line breakage when cozied up to jagged shorelines or tangled tree roots, for example. Fluorocarbon lines can even resist bites from some kinds of fish.

Seasoned anglers recommend using only fluorocarbon leaders, rather than entire lengths of fluorocarbon line, to save on costs. Stretch your line farther, yet reap the benefits of a rugged leader with the power of invisibility.

Fluorocarbon line, contrary to fluorocarbon leader material, is only rated up to 25-pound test. The line version of fluorocarbon is thinner and has less memory than the leader material. Ultimately, the two are not interchangeable, so it’s important to read thoroughly when selecting line or leader products.

How Should I Tie My Fluorocarbon Leader?

While there are endless options for knots that secure your leader to your line, the most commonly used can be quite simple to learn. Many brands take on their versions of basic knots, such as Seaguar, which offers complete video and written tutorials on how to tie your best leader knot.

According to SaltStrong.com, a fishing apparel company with a whole lot of practical fishing knowledge, the Rapala Loop Knot performed best in a string of strength tests.

Keep in mind, however, that the best fluorocarbon leader knot is the one you can execute quickly and easily, every time. While it might be fun to learn new tricks for tying, sticking with one knot that you have seen success with is a smart idea. Each knot has its perks and its drawbacks, so none is truly perfect.

The experts over at Field and Stream also performed strength tests, and recommend six types of knots that achieved the best results. Recommended knots for fluorocarbon leader tying are the Blood Knot and J Knot.

With practice, and these tips pointing you in the right direction, you’ll find the most effective knot for your fluorocarbon leader and accompanying line.

Why Are Fluorocarbon Leaders Better for Luring Fish?

Fluorocarbon is nearly completely invisible underwater. Therefore, these types of leaders work well for attracting “shy” fish and lend stealth to our casting.

These lines are also sensitive, due to the way their molecules transfer energy. A stout line with a delicate side means it’s easier to feel the nibbling on the other end. Get a feel for your fish early on, and this line will hold up when it’s time to reel him in.

Handling is relatively smooth for the rigid nature of fluorocarbon, due to its small diameter. However, if you find that you need a higher break strength, upgrading to the next level won’t change much. The line is still invisible, and easier to manage than higher break strengths of other line types.

A faster sink rate than alternative leaders offers a competitive edge in the deeper water. Troll closer to the bed, and you’re more likely to catch the bigger fish lurking in the depths.

Ultimately, due to the chemical components in fluorocarbon line, it tends to perform better over time. It’s resistant to UV light and chemicals and doesn’t absorb water. It upholds its end of the task, making your job easier when it comes time to fight a big catch.

What Types of Fluorocarbon Leaders Are There?

Fluorocarbon leaders come in a variety of strengths, from 2 pounds to two hundred pounds. Searching online will yield tons of relevant results for one hundred percent fluorocarbon leaders, and it’s important to avoid anything less.

Because fluorocarbon is also available as line, it’s important to note the difference when shopping online or in-store. Be prepared to feel a little lavish, since fluorocarbon leader is more expensive than other types of leaders.

Also, consider the application of your leader, and the environment you’ll be fishing in. There’s no point in using a 200-pound test leader when you’re angling inshore in saltwater. Conversely, you might tempt a larger fish on a lower rated leader, if conditions are right.

A handful of respected brands manufactures fluorocarbon leaders in a variety of test weights, lengths, and price points. Before snapping up a cheap package at your local department store or bait and tackle shop, compare brands and their advertising claims.

Have an idea of your intended fishing environment before buying fluorocarbon leaders. Consider the anticipated size of your catch, and the types of lures or bait you plan to use. Although, don’t overestimate too much on pound test rating.

It’s still possible to catch bigger fish on lower rated leaders. For the best fluorocarbon leader for your needs, choose the leader that applies to how you most frequently fish. Odds are, a fish that’s a pound over your leader’s limit won’t mind if the menu is right.

Make sure you’re looking at specifically fluorocarbon leader, not the line. Remember, fluorocarbon line is intended for full reel use and boasts less of the benefits that leaders possess.

The needs of a casual fisherman will be vastly different than those with hundreds of stream hours logged. Still, finding the best fluorocarbon leader lines will reduce stress and increase enjoyment for both camps! 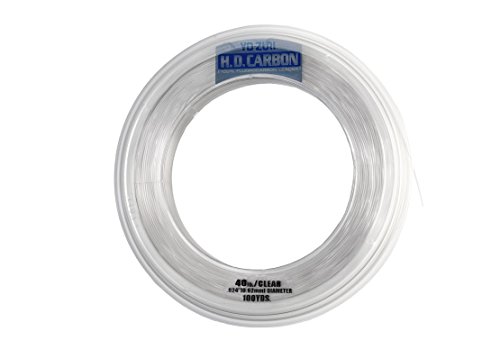 Yo-Zuri’s leader line is available at rates from 8 to 200 pound and advertises 100% fluorocarbon. While invisibility claims are typical for fluorocarbon leaders, Yo-Zuri notes that when nicked or scraped, fluorocarbon becomes highly reflective.

That said, they also suggest that their specially formulated blend of fluorocarbon is “extremely resistant to nicks or scrapes.” Customer reviews note less rigidity than other brands, and an increase in bites over other leaders they have previously used.

Minimal complaints include being unable to get the line to cinch whentying leader knots. The lack of memory in fluorocarbon overall may be to blame, but other brands seem to offer less troublesome handling.

With a thicker diameter than other brands, Yo-Zuri is noted to have survived dragging across rock outcroppings with little or no damage. 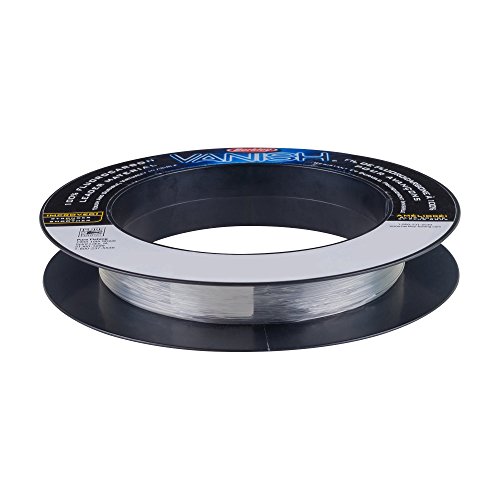 From 30 to 100-pound test, Berkley’s Vanish claims its leaders are the most flexible fluorocarbon variety available. They should know- Vanish was introduced ten years ago, and the newest version touts 20% more shock strength, with the same handlingcustomers have come to expect.

A well-trusted brand with a reputation for competitive pricing, Berkley has given loads of fishers good luck.

From Yellow Fin to Monster Jack, anglers report significant successes in areas with previously few bites. More and bigger fish are familiar stories, although we’re not sure whether that’s Berkley expertise at work or pure chance.

Potential negatives are a slightly less robust countenance than competing brands. The narrower diameter may be to blame, but users report a higher incidence of nicks in the line than expected, given the nature of the material. 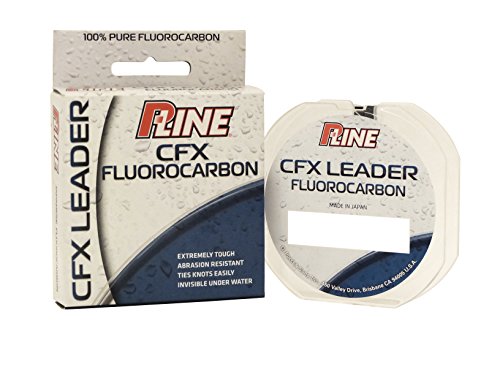 CFX earned the “Best New Line Introduction of the Year,” so what P-Line lacks in industry history, it makes up in catching up to the competition. It’s recommended for use by amateurs as well as professionals and asserts superior strength and stability.

From 2 to 60-pound test, P-Line’s range of fluorocarbon leaders receives rave reviews for ease of use. Easy to tie and easy to reel, with quite limited reports of breakage.

However, in a small study of fluorocarbon leader breaking strength, P-Line’s leader didn’t quite perform in line with manufacturer advertising. The study ranked its 15-pound test with an average breaking strength of 12.5 pounds. 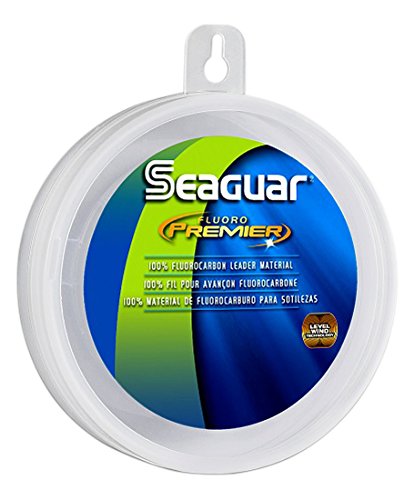 Seaguar notes it’s constructed with double structurefluorocarbon, and touts its impact strength. While talking itself up might seem boastful, Seaguar customer experiences consistently reflect serious muscle in this leader material.

While this product was not ranked in the fluorocarbon leader breaking strength study, Seaguar’s other products ranked below their reported pound test when used with and without a knot.

Going up against Northern Pike, as well as salmon and trout, Seaguar has earned a few notches in its belt.

Offerings range from 12 to 200-pound test, with smaller diameters advertised. However, some breakage occurred in seemingly non-strenuous situations.

The principles of the fluorocarbon material itself translate into less memory in general, so it’s no surprise that Seaguar’s Fluoro line receives some criticism for that trait. 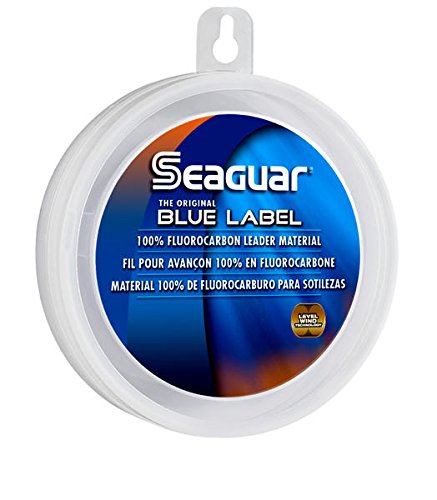 Blue Label is available in pound test ratings from 2 to 80 and claims it has the best tensile strength.

Its knot strength is ranked slightly below Fluoro Premier, but Seaguar suggests that anglers can use a shorter test leader than with other fluorocarbon options.

Positives include the well-promoted knot strength and ease of tying. This leader proves its power through the fact that it withstands bites from Pike.

Also, Blue Label regularly nets reluctant fishwhere highly visible lines miss out on bites. A negative of note is a lack of strength in certain situations, though this doesn’t appear to be widespread.

Want up to date fishing tips, tricks and reviews?

The Best Fishing Pliers: You Shouldn’t Unhook a Fish Without Them!

The Best Fishing Gloves: Get a Better Grip if You Want Bigger Fish

The Best Fishing Backpack: A Durable and Easy Way To Carry All Your Gear

The Best Fishing Reels: Your Ticket to Catching More Fish

Content Uploader
Earnings Disclaimer: When you buy certain products from some of the sites which we link to, River Rat Guide receives a commission.