Bowfishing is both an exciting and challenging sport!

Finding the best bowfishing reel, that you know can stand up to the harsh conditions of bowfishing, just might be even more challenging.

Today, I am going to walk you through how to pick out your reel, set it up, plus some quick bowfishing tips that will have you landing more fish!

*Keep reading for full reviews below

The Different Styles of Bowfishing Reels

There are only a few different types of bowfishing reels. Each of which has their advantages and disadvantages. Most anglers that get into bowfishing will start with either a hand-wrap reel or a spincast reel, but will eventually find themselves wanting the ease of use and safety of an AMS Retriever reel.

Spincast reels are your most basic and commonly used reels. Commonly found on starter fishing poles, spincast reels come pre-round with regular fishing line and are the least durable of the three. You release the line before you shoot, and the line freely flies off the spool. The biggest advantage to using a spincast reel is the ability to set your drag, so you can fight a fish easier.

Exactly how it sounds, hand-wrapped reels require you to manually wrap the fishing line around the spool and hold it in place by putting it in a line holder. Once you release your arrow, the line breaks free from the holder and retrieved by manually rewinding the reel.

Retriever reels have grown in popularity and are often used by anglers trying to land huge game fish or even alligators. These reels use a thick 200 lb braided line that’s stored in a bottle instead of wound up around a reel. This allows the line to smoothly tear through the air free of tangles until the stopping device is pushed or the line runs out.

No matter the reel you go with, you want them to release once you fire your arrow automatically. If not, the line will keep the arrow from flying, and instead, it will “snap back” right at you. Even if you do avoid the arrow, this kind of pressure wrecks reels. Most bowfishing specific reels you don’t have to worry about, but not all spin casters have this feature.

How to Attach to Bowfishing Reel to Your Bow

Installation depends on the type of reel you buy. You can watch this video to learn how to install an AMS Retriever Reel, which is what I recommend as the best bowfishing reel.

The reel comes ready to mount and is going to screw onto your bow where you would usually mount a sight. Most of the reels have several mounting positions; the trick is to set it at a place where it’s comfortable and the trigger. Is easy to reach.

To install a spincast reel on your bow, you’ll need to pick up a bowfishing reel seat that attaches to your bow. A reel seat will fit any spincast reel and works just like mounting a feel on a fishing pole.

How to String Up an Arrow on Your Bowfishing Rig

First off, you need to make sure you’re using safety slides to tie on your bowfishing arrows. Without them, it’s just an accident waiting to happen.

You can watch the video for step by step instructions on how to tie a bowfishing arrow knot. 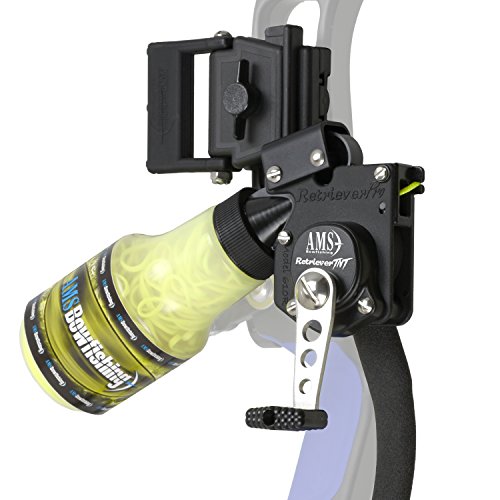 The AMS Tournament is a retriever reel that is made to land the biggest game fish in the water. It features a 4:1 gear ratio and a longer handle giving you increased leverage and speed. This bowfishing reel comes with everything you need to start shooting fish: 25yds of Dacron line, telescoping clamp, quiver mount, safety slide kit, trigger guard, and mounting hardware.

These AMS reels are easily mounted into the holes where your site would typically be attached, making them fit any bow. What stands out when you’re bowfishing with the reel is the speed: both shooting speed and reeling speed. One of the biggest knocks on AMS reels have always been bringing the fish back on the boat, but with this upgraded gear ratio, fighting fish has never been easier. Also, you don’t have to worry about the arrow snapping back since it’s an automatic release.

You’ll also be thoroughly impressed with the quality of an AMS. Made here in the USA, it's a bowfishing reel you know is going to last as soon as you get it in your hands. You know the adage “you get what you pay for.” Plus, it’s available in a left handed or right handed model, so it doesn’t matter which way you shoot. 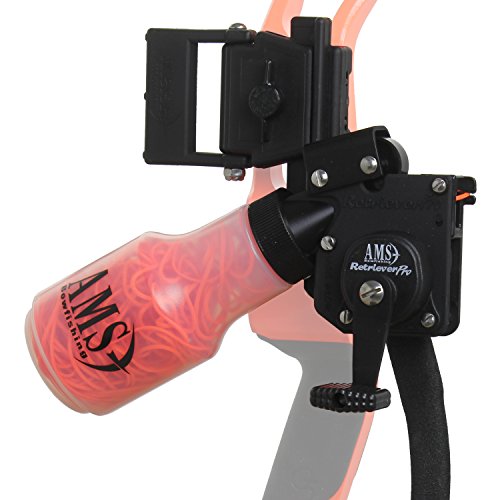 The AMS Retriever Pro is only a slight step down from the Tournament Pro. It comes with everything you’d want from an AMS: Dacron Line, 2 AMS Safety Slide Kits, built-in storage for the arrow and replacement nocks for your arrows. Made in America, this reel is both durable and light, plus, corrosion resistant. The trigger guard keeps the excess line from catching on the trigger, and the Integrated telescoping clamp adjusts forward.

It’s made with the same heavy-duty quality that the Tournament model is, so you don’t have to worry about having to replace it after just one season. And it’s an automatic release too, so no snap back. Also, there is no drag when you release the arrow, the sucker just flies!

It is disappointing that you can’t adjust the drag to reel a fish in right, but it’s the sacrifice you make to utilize the tangle-proof bottle design vs. a standard spool of line. 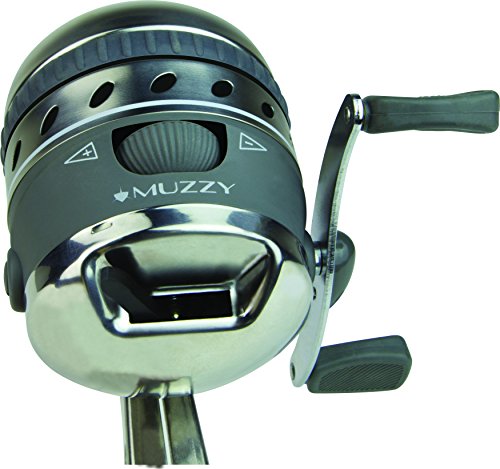 If you’re going to go the spincast reel route, then the Muzzy XD Bowfishing Reel is what you’re looking for. Made specifically for bowfishing, this spincast reel is made to hold 200 lb test bowfishing line so you can reel in the big ones.

Muzzy reels put no drag on your arrows, and the retrieval speed is phenomenal. Compared to your run of the mill throwaway spincast reels, Muzzy reels are heavy duty and built to last. It features an automatic style disc drag and stainless and brass drive system.

The drag system is ideal for fighting fish and reeling them in. When you hit a massive carp, having the ability to adjust the drag is priceless. Remember, spincast reels don’t just screw into any bow. You need to make sure to pick up a bowfishing reel seat. 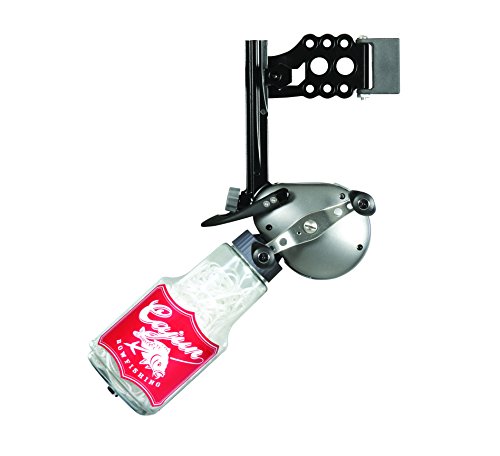 After the AMS and Muzzy reels, the quality in bowfishing reels absolutely plummets. I will hand it to Cajun for trying to lead the way through innovation, but sadly they came up short.

A good idea, in theory, this “hybrid” reel combines the safety of the AMS bottle reel style with a traditional spincast reel for a faster line. It’s ambidextrous, so it doesn’t matter if your left or right handed.

The big issue is that it’s just way too bulky, and it’s a bit heavier than you are probably used to which can mess with your shot the first couple of times on the water. Since it’s a spin cast, though, it does have real drag and allows you to “fish” the fish you shoot.

Overall, you’ll be better served to go with either an AMS Retriever reel or a traditional spincast reel. 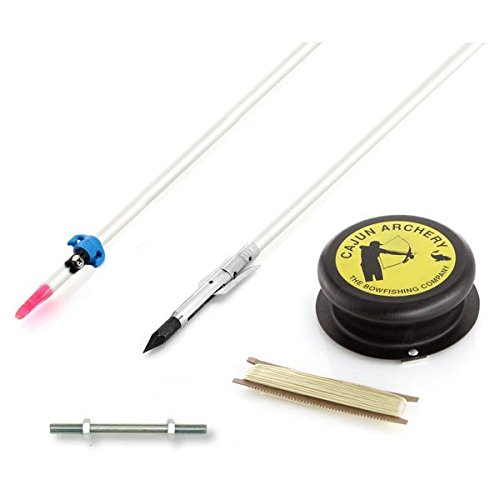 The Sting-A-Ree by Cajun is actually a complete bowfishing kit. You get a solid fiberglass arrow with sting-a-ree Tournament point and a safety slide, and the Cajun Screw-on Hand Reel.

The hand reel is your most basic bowfishing setup, but it works well because you don’t need an overcomplicated system to land some big fish. It easily attaches to any bow with a counterweight hole--which more than likely yours does.

This is an entry level bowfishing reel. And when you hit a fish, you’ll be fighting with your bare hands on the line the entire time. One upside to this kind of setup is since there’s nothing fancy pulling on your line, your arrow doesn’t have any drag.

As you can see, there are a lot of styles to choose from and some really great reels out there!​ We encourage you to try them all to learn what style you shoot best with.

If you're just starting out, make sure you remember to aim 10" below the fish or you'll miss. And try make sure to pick out a reel that's loaded with safety features like the AMS.

Have you tried any on our list? If so, which do you think is the best reel for bowfishing? Let us know in the comments!​

The Best Fishing Backpack: A Durable and Easy Way To Carry All Your Gear

The Best Fishing Reels: Your Ticket to Catching More Fish

The Best Braided Fishing Line: You Need a Line That Won’t Snap

The Best Fishing Pliers: You Shouldn’t Unhook a Fish Without Them!

Content Uploader
Earnings Disclaimer: When you buy certain products from some of the sites which we link to, River Rat Guide receives a commission.